“Tentastic! Hello, we are PENTAGON!”

Yes, this is the Pentagon boys capturing your hearts with their flawless music. Pentagon South Korean band was formed under Cube Entertainment during a reality show who made its debut in the year 2016. The group initially made its debut with ten members however, currently, it consists of nine members only. 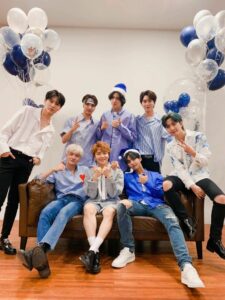 Are you eager to learn more about the group in detail? Simply keep scrolling down for more details.

10th October 2016 is the Pentagon debut date. The group was formed and managed by Cube Entertainment. The group made its debut through a mini album which was self-titled. Pentagon made its debut with initially 10 members, namely Hongseok, Hui, Yeo One, Shinwon, Wooseok, Kino, Yuto, E’Dawn, Jinho, and Yan An. However, Cube Entertainment terminated the contract with E’Dawn on 13th September 2018 when Hyuna announced her relationship as he failed to maintain the trust with the company. Lastly, on 14th November 2018, Cube Entertainment officially declared the departure of E’Dawn from the group as well as the company.

Are you eager to learn about the nine Pentagon kpop members in detail? Here you go.

Jinho whose birth name is Jo Jin Ho, was born on 17th April 1992. Hence, his current age is 31 years. The zodiac sign of Jinho is Aries. His height is 168 cm and his weight is 52 kg. The position of Jinho in the group is the main vocalist.

Lee Hoe Taek, popularly known as Hui, was born on 28th August 1993. His current is 30 years. The zodiac sign of Hui is Virgo. His height and weight are 171 cm and 57 kg respectively. Hui is the leader of the group and his position in the group is the main vocalist, main dancer, and producer.

Yang Hong Seok, whose stage name is Hongseok, was born on 17th April 1994. His current age is 29 years and his zodiac sign is Aries. The height and weight of Hongseok are 178 cm and 68k g respectively. Hongseok is the lead vocalist of the group.

Shinwon’s birthdate is 11th December 1995, and his real name is Go Shin Woon. The current age of Shinwon is 28 years. He belongs to the Sagittarius zodiac sign. The height of Shinwon is 184 cm while his weight is 68 kg. The position of Shinwon in the group is a vocalist.

The actual name of this handsome Pentagon K pop member is Yeo Chang Gu. His birthdate is 27th March 1996, and hence, his age is 27 years. The zodiac sign of Yeo One is Aries. The height of Yeo One is 179 cm while his weight is 60 kg. The position of Yeo One in the group is the lead vocalist.

The birth name of Yanan is Yan An, while his birthdate is 25th October 1996. The current age of Yanan is 27 years while he belongs to the Scorpio zodiac sign. The height of Yanan is 187 cm while his weight is 70 kg. The position of Yanan in the group is the vocalist and the visual.

According to the Pentagon kprofile of the members, Adachi Yuto is the actual name of Yuto. The birthdate of Yuto is 23rd January 1998 while his current age is 25 years. The zodiac sign of Yuto is Aquarius. His height and weight are 185 cm and 63 kg respectively. Yuto is the lead rapper, lead dancer, and sub-vocalist of the group.

Kang Hyung Gu, who is popularly known as Kino was born on 27th January 1998. Hence, his current age is 25 years. The zodiac sign of this amazing person is Aquarius. His height is 177cm and his weight is 59kg. The position of Kino in the group is main dancer, vocalist, and sub-rapper. He is also the face of the group.

Jung Woo Seok is the actual name of Woosek. His birth date is 31st January 1998 and hence, his age is 25 years. He belongs to the Aquarius zodiac sign. The height and weight of Woosek are 191 cm and 72 kg respectively. Woosek is the main rapper and sub-vocalist of the group. He is also the Maknae of the group.

Who is Most Popular Member of Pentagon?

Yanan, who is Sub Vocalist and Visual is the most popular member of Pentagon.

When did Pentagon debuted?

What is fandom name of Pentagon?

UNIVERSE is the fandom name of Pentagon Kpop Group.

Henceforth, considering the ages of the Pentagon members, the eldest in the group is Jinho while the youngest is Woosek. All the members of the group are Korean members except for Yahan who is Chinese and Yuto who is Japanese. After getting popular with their debut mini album, the group also made their debut in Japan through the Japanese album after only six months. The group is present on various social media platforms from where the fans can book their event tickets with ease.