2PM is a group of six members of K-pop boys performing under JYP Entertainment. The group officially made their debut with “Hottest Time of the Day” a single album that was released on 4th September 2008.

The 2PM Kpop group is one of the subgroups of One Day, a group of eleven boy members. The group was formed by one of the Korean Musicians Park Jin-Young. However, later the band got split up into 2 subgroups, namely 2PM and 2AM. Both groups are similar yet independent on their own. The group 2PM made their debut with the single song “10 Jeom Manjeome 10 Jeom” which revealed the group’s acrobatic dancing style. Their next popular single number was “Again and Again” which was released in 2009.

Are you also a huge fan of the 2PM kpop group? Let’s explore more about the group and the group members in detail by learning the age, birthday, height, weight, and zodiac sign of the members. 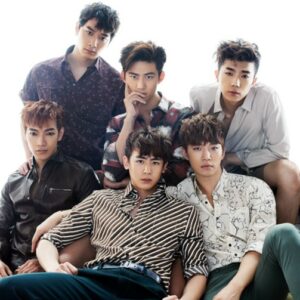 The actual name of Jun.K is Kim Min Jun. The birthdate of Jun.K is 15th January 1988 and his age is 34 years currently. He was born in Daegu, South Korea, and his zodiac sign is Capricorn. The height and weight of this 2PM member are 178 cm and 66 kg respectively. He is the main vocalist of the 2PM Korean band. Jun.K follows the Buddhism religion. On 17th October 2012, Jun.K officially announced that he was legally changing his name from Kim Junsu to Kim Minjun.

The birthname of Nichkhun is Nichkhun Buck Horvejkul. His birthdate is 24th June 1988 and his zodiac sign is Cancer. The current age of Nichkhun is 34 years and his birth place is Rancho Cucamonga, California. The height of Nichkhun is 180 cm while his weight is 64 kg. The position of Nichkhun in the group is of a lead rapper and a sub-vocalist. Nichkhun is from a rich family due to which he is also nicknamed as the “Thai Prince” by the group members and fans from South Korea. He holds both USA and Thailand citizenship.

Ok Taec Yeon, popularly known as Taecyeon was born on 27 December 1988 in Bedford Massachusetts. His current age Taecyeon is 34 years while his zodiac sign is Capricorn. The height and weight of Taecyeon are 186 cm and 76 kg respectively. The position of Taecyeon in the group is the main rapper, sub-vocalist, and 2nd visual. Taecyeon knows how to speak Korean, Japanese, and English languages. He has also acted in various Korean dramas like Cinderella’s Sister, 99 Days with the Superstar, Dream High, Who Are You, Save ME, Vincenzo, and many more.

According to the 2PM profile of members, Wooyoung’s actual name is Jang Woo Young. His birthdate is 30th April 1989 while his current age is 33 years. The zodiac sign of Wooyoung is Taurus. The birthplace of Wooyoung is Busan, South Korea. The height of Wooyoung is 180 cm while his weight is 65 kg. Wooyoung is the main dancer and sub-vocalist of the group. Wooyoung was selected as the trainee by JYP Entertainment in an audition in which more than 5000 candidates participated.

Lee Jun Ho, whose stage name is Junho was born on 25th January 1990 in Seoul, South Korea. The current age Junho is 32 years while his zodiac sign is Aquarius. His height of Junho is 178 cm while his weight is 67 kg. The position of Junho in the group is the main dancer and lead vocalist. As Junho is having resemblance to Rain, he has been many times accused of having plastic surgery. He was also kicked out by JYP Entertainment due to his bad attitude.

According to the profiles of 2PM members, the birth name of Chansung is Hwang Chan Sung. His birthdate of Chansung is 11th February 1990, and his current age is 32 years. The zodiac sign of Chansung is Aquarius. His height of Chansung is 184 cm while his weight is 75 kg. The position of Chansung in the group is the sub-vocalist and Maknae. Chansung is also a trained Kumbo and Taekwondo person for martial arts. He has also acted in various shows like Unstoppable High Kick, Dream High, Romantic Doctor, Teacher Kim, Romantic Boss, and many more.

The 2PM group consists of 6 members currently. The group originally was formed with 7 members, however, Jaebeom, who was also the leader of the group left the group in the year 2010 and never returned again. Currently, Chansung is the Maknae of the group and the group doesn’t have any leader. All the members of the 2PM group are having their own Twitter and Instagram accounts. Yet, the group has its own presence on social media platforms like Twitter, Facebook, YouTube, etc. The fandom name of 2PM group is Hottest while the official fan color of the group is Metallic Grey.